‘Loyal to her feminist position, Vivian Ostrovsky has discovered during her residency at Lightcone new female voices from contemporary cinema, all the while revisiting some landmark figures who have left an imprint in the history of experimental cinema, to present a programme made up of exclusively of films by women.’
——————————————————————————————————————— Programme no 7 – No More Carefree Laughter 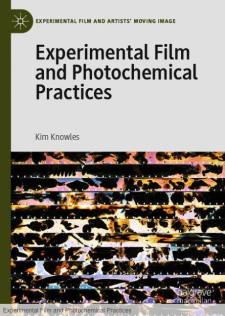 The Art Department and Cinema Studies Program at UMass Boston

At the onset of his landmark essay Towards A Minor Cinema, Tom Gunning quotes Deleuze and Quattari: There is nothing that is major or revolutionary except the minor.
For RPM 2020, we ask, what is “minor cinema” today and what can it do for us, our consumption of media, our relationship with the environment, our world?

Memos For The Next Millenium 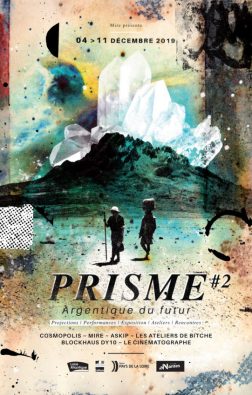 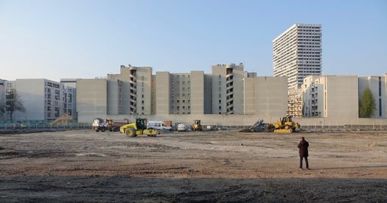 On the Encounter of Species
PROCESS   – Riga, Latvia

For the first edition of PRISME, Mire would like to share its knowledge of an analog filmmaking made around the world which, more than a simple activity, is a real exploration process.  Claiming ways of seeing, doing and thinking above all, PRISME lets cinema freeze or expand, presents pioneering practices and discussions about the future, opens to photography, visual, performative, sound arts.

In the wake of Bains Argentiques, international artist-run filmlabs meeting that Mire organized in 2016, PRISME celebrates current analog film practices and dynamics as well as promoting the networks that are committed to its development, artistic experimentation in general, and do it yourself philosophy.

Present both before and behind the camera, Baines, Haut and Hindmarsh use film structures and materiality to map out subjectivities, landscapes and consequent interlacing dialogues. Activating places and spaces, this program rebounds with echoes and absorptions, the self and the body, drawing perimeters and crossing them.

Visions in the Nunnery

INDEPENDENT FILM SHOW 18th edition has in common inexhaustible film inventiveness and handcrafted film manuality, the film-makers are able to modify the ductile time’s membrane till the meditative trance, orientating the cognitive experiences to different directions. These three programs reveal authentic essences, achieved by the independence to face every human aspect without inviolable rules; these films present strong stimuli temporarily leading to an enchanting land where light illuminates the visible and audible soft borders. 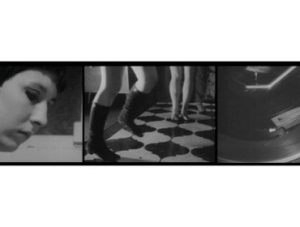 After 68 : The Economy of Resistance 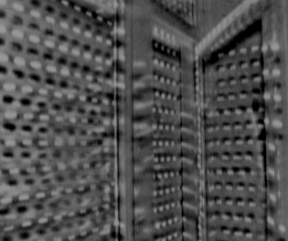 ‘Suspended between appearing and disappearing, presence and absence, the legible and the illegible, the films showcased here explore perceptual limits and the spaces between. A gradually deteriorating VHS tape, fragments of old colour 16mm film stock, traces of memory, glimpses of light and shadow, forms emerging and dissolving – our attention is moved from the figurative to the abstract, finding focus and then losing it again.’ 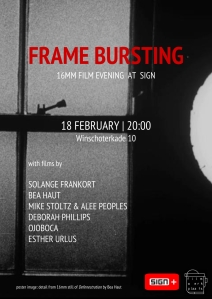 BEEF presents an evening of single and double-screen 16mm projections and live performances emphasizing bodily encounters, gestures and inscriptions. Acts of physical endurance are combined with explorations of space, place and the environment. The three artists engage in different but overlapping ways with the material and mechanical specificities of celluloid film, incorporating humour and absurdity. Expect bodies, bicycles, feet, and a participatory ‘living film loop’.

Having shared a studio for two years; Bea Haut, Jenny Baines and Laura Hindmarsh here bring together their respective film work, using the screening as a conversation between the individual works and a chance to examine the echoes, absorptions and outcomes of their interlacing practices. Q&A with Kim Knowles.

Cephalopod is a collaborative film-based hub taking residence for the weekend of Supernormal 2016. Their striking mollusc-inspired shed hidden deep in the woods will host a scheduled selection of events from BEEF members and friends; including a 16mm film drop in workshop as the cephalopod transforms into a darkroom, screenings from BEEF members & friends, and a performance of experimental live soundscapes from Saltings & sound explorations and excursions from BEEF members.

Part of the European Cooperation Project RE MI 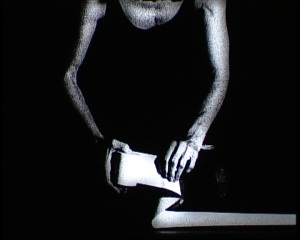 Four Corners and the East End Film Festival present a panel discussion, chaired by Helen Dewitt, focusing on the use of analogue film technologies in a predominantly digital age; with the participation of Nicholas Abrahams, Douglas Hart, Bea Haut. With extensive experience working with Super 8, 16mm, alternative chemical processing and analogue video this panel will discuss the pros, cons, pitfalls and practicality of such technology. 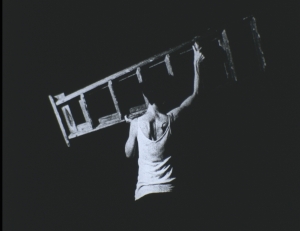 Black Box Shorts 1: In the Body of Technology

This short experimental film programme reflects on the way technology dialogues with the body, creating a two-way process of transformation. Gestures and movements are broken down and analysed, destabilised and defamiliarised. The physicality of the body meets the material of film and digital, migrating through forms and layers and creating new perceptions and experiences. The screening ends with a live performative intervention that connects the filmmaker, the audience, the filmstrip and the projected image. [PG]
Details here

Analogue Recurring is an experimental 16mm screening event, which illuminates the mechanical processes and materiality inherent in analogue film. Embracing a DIY ethos the event celebrates contemporary celluloid film in the digital age; a field continuously redefining it’s self as durational and durable. Including many new works hot of the rollers.

An exhibition and sale of photographs

Friday 6th, Saturday 7th and Sunday 8th of May

“Our machines are disturbingly lively, and we ourselves frighteningly inert.”
(Donna J. Haraway) 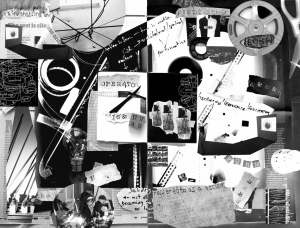 7th – 10th December : This event will include 16mm film workshops, seminars, live performance, and a day of film installations. It will include work by staff and students from the Slade School of Fine Art and the University of Greenwich. ‘Motion in Form II’ will act as a platform for debate about the relevance and specific qualities of analogue film, as well as its extension into other media.

Expanding notions of performance though the material, the spatial, the personal and the relational.

Displaying a wide range of technical and conceptual approaches, the films in this programme question the role and nature of performance beyond the strictly theatrical. Not acting but acting out in ways that force us to see, experience and understand things differently. Here, performance sets up critical relations between people and places, and weaves a complex fabric of fluid and interchanging selves. What is performance and, most importantly, what isn’t? 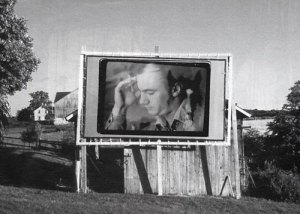 The Dream that kicks: Film Doubled

Projectors invade the auditorium to reveal seven amazing double screen works – three seminal classics and four from the British new analogue wave. Interaction, juxtaposition, synchronization and repetition drive these films. The action here is not just happening on the filmstrips – it also belongs in the moment of projecting.

One night installation exhibition only

Australian artist Laura Hindmarsh and London based artist Bea Haut bring together two 16mm film based works featuring the artist embodied within the frame. Present and exposed, yet deceptive through the coupling of alterations in time and space, these works complicate human gestures and suggest a viewing experience perceptive of the form. Running for one night only as a looped gallery based installation on 16mm film.

Cinema and science meet in an event with playful talks and serious visuals.

Analogue Recurring is a 16mm film-screening event, a celebration and study of analogue film and projections. Exploring the mechanical processes and the visceral pleasures of this art form, this occasion delights in the materiality of celluloid film as well as in the performative nature of analogue projections. This show is a contemporary selection of artists and film-makers, who, in the digital age choose to engage with analogue film. Double Vision is particularly focus on double screen works, many of them made for this event, which will be projected on David Leister’s synchronised dual 16mm projectors. 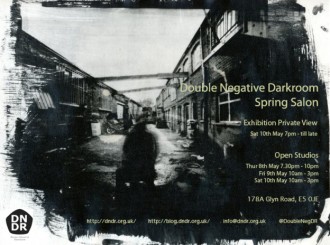 One Hundred Foot II is the second gathering of filmmakers’ and artists’ 16mm films. As an industry standard, 100 feet of film (approximately 3 minutes) is the given length for a small spool of 16mm film. This given/standard/restraint has been used by artists in the past and remains a pertinent form/format for creating films. Utilizing this number, a film can be conjured up within the parameters of two distant but specific points – 0 and 100. In understanding that film, as opposed to digital, is measured in this tactile and physical form of length, the filmmaker/artist must address the issue of time through the measurement of a material length. For some, this constraint is seen as a time limit; for others, it becomes a finite amount of physical material in which to construct a work, similar to a sculptor’s material.

collective-iz invites you to: Screenscapes – a screening of artist’s film, video and sound.

In 1983, Deke Dusinbeere stated in his programme notes for Avant-Garde British Landscape Films at the Tate, that – even when culturally and physically we are incapable of sharing the same view – we can all appreciate the  ‘need to search for a new representation of the world, for new terms in which to envisage the future.’ * The artists in this programme continue this search, engaging and revealing through ‘light, colour, movement and texture’ * a diverse landscape with infinite ways of seeing it.

Projecting films on David Leister’s ‘portable’ 35mm Fumeo projector, this evening has been concocted to set a challenge to artists and filmmakers to experiment within the 35mm frame yet work outside of industry parameters. Continuing with an interest in celluloid film’s materiality and the performance of projection, Analogue Recurring would like to provoke  DIY film technologies, help define contemporary artist’s analogue film production and confound the general view that analogue film is dead.’

A series of short exhibitions and performance events by seven artists that predominantly work with analogue film and installation. They will each install a new work, or new composition of works at the Project Space at various points from the months of July through to October 2013.

The remit is purely to explore the sculptural possibilities of film installation within the project space. This will be an opportunity for the artists to experiment with the methodologies and material of celluloid film and projected light, as well as the expanded cinematic qualities of film as performance and form.

A full listing of the artist’s information and event dates will be posted here:  http://motioninform.tumblr.com 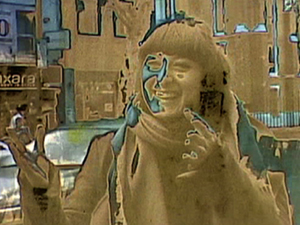 Thursday 3th October,   6-9pm.                            316-318 Bethnal Green Road, E2 0AG
Friday 4th to Sunday 6th, 11am-6pm.
no.w.here opens its laboratory and studio to reveal film installations and screenings of works made within the very space they are shown. Drawing upon an incredible body of work made by no.w.here’s members, moving image art will be installed and projected within the lab as an immersive experience.
These works combine digital technologies with a deep understanding and engagement with the material, mechanical and chemical nature of film. Continuously looping and playing, the works will be situated in relation to the machines in which they were made, drawing out an understanding of the capabilities of these ’emitters of light’ and bringing a deeper appreciation of the qualities of film as a vital and important contemporary material. 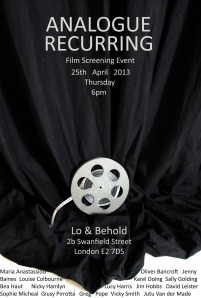 Analogue Recurring is a celluloid film-screening event, a celebration and study of analogue film and projections. Exploring the mechanical processes and the visceral pleasures of this art form, this occasion delights in the materiality of celluloid film as well as in the performative nature of analogue projections. This show is a contemporary selection of artists and film-makers, who, in the digital age choose to engage with analogue film.